My last post was about visiting Grounds for Sculpture. Located on the beautiful grounds is Rats restaurant.

You might remember that I love going out to eat. Period. I also love visiting places that are owned by chefs I’ve seen on TV. The winner of Top Chef, DC was Kevin Sbraga who was the chef at Rats. Since he’s won, he opened is own place called Sbraga located in downtown Philadelphia.

Even though he was no longer there, I thought it would still be fantastic. Before I tell you what I thought, I should tell you about the name. Rats is just not the best name for a restaurant, don’t you agree? It doesn’t bring to mind thoughts of a clean, rodent-free place to eat, at least in my mind.

But…it’s actually named after the character, Ratty from The Wind in the Willows. Seward Johnson, founder of Rat’s and Grounds For Sculpture, thought he threw the best parties with the best wine, just like Ratty. Totally cool, right? Much better than dirty rodents in the kitchen!

So, what did I think of the place? I did not like it. 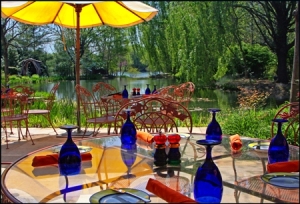 The decor and atmosphere were cool. The outside front of the place looks like a French village. The back of the restaurant looks out onto a pond and sculptures, which is totally cool.

The food though, was just not good.

I got the mussels in a white sauce. They were okay. The flavor just wasn’t good and some of them had beards, which I hate. My daughter got a grilled cheese from the kids menu. She wasn’t eating it and I couldn’t figure out why. Then I tasted it. I’m not sure what kind of cheese they used but it wasn’t American or Cheddar. That’s fine for a grown up sandwich (I guess) but this was from the kid’s menu.

And it was expensive. Normally, I don’t talk about costs. Everyone has different levels of what they think is worth spending money. What I think is expensive you and a total waste of money, you might think is on target. But, I think without a doubt, we would agree this place is expensive.

Here’s what I loved:

Here’s what I liked:

Here’s what I didn’t love:

Have you eaten at Rats?
What did you think?

The most popular posts!

Check out the latest issue: